Among public health issues, obesity is soaring. Drinking water is a simple solution to manage daily calorie intake. This is why water should be considered as the primary source of hydration.

The World Health Organization has established an International Classification of adult underweight, overweight and obese according to BMI : normal range: 18.50-24.99, overweight ≥25.00, obese ≥30.00.

WHO’s latest projections indicate that globally in 2005 approximately 1.6 billion adults (aged 15+) were overweight and at least 400 million adults were obese

WHO further projects that by 2015, approximately 2.3 billion adults will be overweight and more than 700 million will be obese. 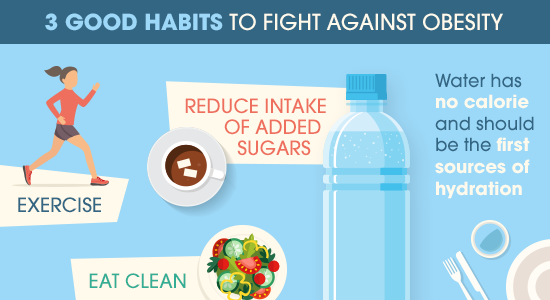 At the individual level, people can take part in physical activities and adopt good eating habits.

Among them, reducing the intake of added sugars from what we eat and drink is highly recommended.

The recommendation of the American Heart Association is that the daily intake of added sugars shouldn’t represent more than 100 calories for a woman and 150 calories for a man.

Water has no calories and is to be privileged as the first source of hydration when you want to manage your weight.

In addition, preliminary research among overweight adults who are dieting as part of a healthy lifestyle, suggests that drinking water as the first source of hydration would result in weight loss (4-5).

Combined with physical activity, drinking water would also help to increase fat oxidation (6-7). Intervention studies conducted at school showed that schoolchildren who are drinking water as the first source of hydration would stabilize their weight (8).